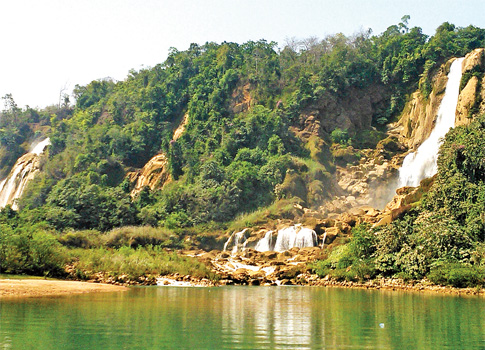 As a writer, he had to move to the cities assigned to him. Although the author is a Burman ethnic group, it has been circulating in Shan State since ancient times.

Since arriving in Shan State since 2008, I have been in Mong Hsu for two years; He has been in the village for three years and is currently working in the project planning office in Linha District. Before moving to Linke, I had a desire to go to Kyaing Toung Waterfall. Difficulties in the region; He didn’t go through security situations. He visited the Union Day on 12-2-2016.

The Kyaing Toung Waterfall is located on the Nam Ton Creek, 30 miles northeast of Kyaing Toung, in the northeast town of Moe Nai, Likel District, Shan State. The Namtun stream is in the Mongkai Township, in southern Shan State, and is in Chaung Chay Township. Nansan Township, Yangon Mae Nye Township Kyauk Tau Township (sub) It flows through the Thanlwin Township and flows into the Salween River near Tutsu village. The fertile plains are cultivated along the passages. Famous plains include the Lachish Plain and the Plain Grasslands Lantern plain The Wharf plain. Significantly, the flow of water flows downstream in southern Shan State and flows into the Salween River in southern Shan State. The Namtun River is a waterfall in summer and summer, with the exception of waterfalls. rain, The calm and steady flow of water is unmistakable. 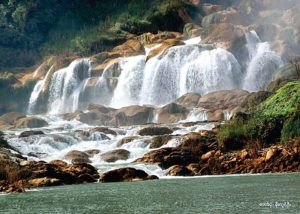 The Kyaing Toung Waterfall is the largest and most spectacular waterfall in Shan State. Construction of a 54 megawatt (15 megawatt x3) hydropower plant has been diverted from the Kant Tho waterfall and is providing electricity to the nation. Each year, it generates 377.6 billion kilowatts of electricity.

There are two roads when the Kyaing Toung Waterfall comes from Taunggyi. Taunggyi – Loi-Liang San (Shan Hill) – Khulan – Kengtung Road and Nansan – Moe Noe (Mahar Village) – Kengtung Road. The author and team traveled through Lin-Moe-Thu-Aye-Kone-Kone. Lin Lai – Rainy 22 miles; Rain – Listen for three miles Headphones: Locations 31 miles Kengtung – Kant Taung Waterfall 30 miles; The total distance is about 66 miles from Lai Kai to Kandawgyi Falls. The group started their journey from February 12 at 7:00 am on the February 7 morning commute by Lin Yuan to Kengtung and stopped for breakfast in Moe Nye.

After about 15 minutes, he left the rain and went to the barn to beg. Through the ear, I reach the village of Loi Lake. The hike starts at Loi Lake. Sidewalk The large trees that grow on the fields Large bamboo forests; Large islands; Jungles A variety of native plants; We saw all kinds of forests. The forest is rich with birdlife and is rich in variety. Sidewalk While enjoying the scenery of the jungles, it crosses the Namtung and Namtan bridges across the Kyaing Toung and reaches the sign in Kyaing Toung. After traveling through the city, I proceeded along the road that was built between the jungle canyons and the Kyaing Toung Waterfall at 10 am.

It is about four miles to the falls. It is a dirt road from the branch to the waterfall. Roads with concrete piers are laid. The autopilot of the team drove along the red dirt road that intersects the hillsides of the hills, and soon arrived at the staff quarters of the Kyaing Toung Hydropower Station. There is a beautiful view of the Kyaing Toung hydropower plant and the Kyaing Toung waterfall at the top of the staff yard. The waterfall is in two places. From the south side to the factory, they reached the hydropower plant. Observers are arriving by bus.

At the hydropower plant, he met with U Thein Kyaw, the factory’s director, and the factory manager presented them inside. The factory is three storeys with only one floor and two floors below ground. He explained that there was only one waterfall, and that the visitors had to spend two hours each day at the same time. He visited the Upper Falls. Upstream of the Tonle Sap Dam, the Nam Tung River is pumped through a septic tank and constructed of a 15-foot x 26,000-foot steel-reinforced steel pipe. The total water is 427 feet high above the falls, the scenery was enjoyed by nature. They descended from the top of the falls to the brook of the falls. Under the canyon there is a canopy underneath a garden and under the bushes. A group of guests was in a group shower. The vacationer replied. Lunchtime players play. 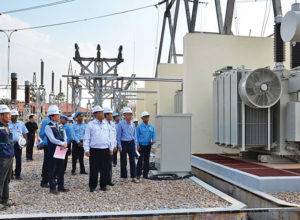 Locally popular with tourists, Kyaing Toung Falls are like fairy tales. It was a great day. It is learned that the village was inhabited by the famous Khun Khun Sam Lo in the Loyola area. The ceremony was held from February 9 to 11. By the time the writers arrive, the shops are gone and the merchants are back. Unfinished shopping malls; Event staircase; Seeing a dry party was a feeling of bitterness.

The team went to Pasha village in Kengtung, studied the Khumbanmom and Nan U Oo’s memorial gallery and returned. The city of Guangdong is an ancient city with its history, and the beauty of the power plant is more beautifully decorated with the beauty of the canyon. It is a place to visit and enjoy the beautiful natural environment. Roads are now dirt roads and summer and summer. rain, It is one of the areas for tourism development to attract more tourists and tourists from abroad.